Baby Naming: "How'd you come up with Ebba?" 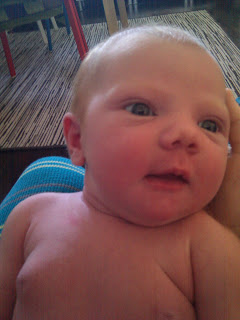 Someone asked about the process we took in naming our baby, and I think it’s a good question!  It was actually more complicated than I had anticipated.  As a writer, I’m always going through names and picking out ones I like, different combinations of first, middle, and last names, looking at name meanings.  So, I figured, how hard could it be, right?

Well, it turns out, naming my own baby was sliiiiightly more complicated than naming a character in a book.  :)  There are so many things to keep in mind!  For example:

There are also a ton of online resources for baby naming, all telling you what to name or not to name your baby.  For example, there are the top baby name lists, websites that tell you the meaning and origin of names, and even different tools to help you name your baby.  I have to say, none of these helped me at all!

Here's what our naming story was.  Unfortunately, it's more of a fluke than a process, so I'm not sure how much it would help anyone else working on naming their baby.  Before we even got pregnant, I used to run name ideas past my husband just for fun, so we both sort of knew the sort of names we both liked.  (Oddly enough, the name we ended up with, Ebba Irene, didn’t factor in any of those early conversations...or any conversations up until a few weeks before Ebba’s arrival.

Once we got pregnant, our initial process was actually to look through this “name day” calendar we’d gotten from Sweden, where each day has a name.  So, yes, that's 365 Swedish names I went through.  :)  I made a list of all the ones I liked best and then we spent time narrowing and narrowing it down.  It was not an exact science.  Frequently, a name that had been taken off the list (like Lilia) somehow would find its way back on the list later when we realized we really DID like it.

Anyway, by the eighth month, we had a list that we were both relatively comfortable with.  We liked as first names: Elin, Lilia, Bianca, and Freya.  And we had a few middle names we were tossing around as well (still including Stark!)

Then, a few weeks later, David brought up the name Ebba.  I’m not sure how it popped into his head, but it’s a fairly common name in Sweden.  (Though it's not even ranked in the States!)  I hated it at first.  It sounded bland and kind of masculine, and a little too much like Abba for my liking. :)  Also, I was concerned people would mishear us and think her name was Eva (a fear that I now know was well-founded!  But I don’t care.)

As the weeks wore on and David kept testing out the name Ebba, I realized that I did quite like it.  It had a nice ring to it -- not too girlie, but still feminine enough for a girl.  It sounded kind of strong (so I could drop that Stark middle name to convey strength!).  And, low and behold, we found it sounded kind of nice with Irene, which is a recurring name in my family.

We hadn’t definitely decided until baby came, but for the final weeks and days leading up to her birth, we pretty much called her Ebba.  Then when she came and we saw her strong brow and shock of red hair, we knew right away that we had made the right choice.  I’m glad we hadn’t officially settled on a name until we met her, though.  Because I think the baby will sort of "tell" you what names work.  Like if she'd come out all dark and more feminine, I might have gone for Lilia instead.

Email ThisBlogThis!Share to TwitterShare to FacebookShare to Pinterest
Labels: parenting