Well, we're here. It's been two months since Ebba took her first swim on this side of my perineum, since she gurgled out her first cry, and since she released all her meconium into her daddy's lap. :)

It's been quite the journey, even just so far.  Ebba says it's been exhausting putting up with us: 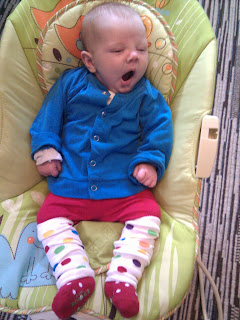 I used to get annoyed at parents who still gave their 1-year-old's age in months, but I understand it now.  The smaller the unit of age measurement, the smaller your baby.  I don't even know how I'll feel when we hit the year mark and have to give up months.  As far as I'm concerned, Ebba is 59 days old today, not two months.  And when she is 1 year, she'll be 365 days old.  When she's 18 years old, she'll be 6570 days old.  Okay, that's a bit crazy, and besides, I'm too lazy to calculate for leap years.  Maybe at 18 I'll have to start measuring in months. :)

In honour of this landmark birthday, I decided I would make some parenting resolutions.  Since Ebba was born on New Years Eve, I didn't really make any resolutions this year.  For these resolutions, my goal is to make them manageable and reasonable.  No more, "I'm going to be the perfect mum!"  So, here goes:

I think that's enough for now. :)  Any other mommy resolutions out there?

Email ThisBlogThis!Share to TwitterShare to FacebookShare to Pinterest
Labels: parenting