Cleaning Out the Activity Closet

Well, here we are with another blog post in just under one month (tomorrow it would be exactly 1 month from my last post...)  Getting slightly better at least!

Anyway, for those who are looking for the Ebba and Mummy updates, Ebba is now just over 8 months old!  Wow!  Time has flown by like a jet fighter, and yet somehow has also flowed as slow and sweet as honey.  Her birth feels like yesterday, and yet it's beginning to feel like she has always been here.

She's babbling now, and almost crawling!  (Time to get those outlet covers!!)  She's had her first long trip, to the Oregon Coast, and dipped her feet in the Pacific for the first time.  She's such a water baby, David had to restrain her from diving right in.  In two days, she'll take her first flight and visit the city where I grew up (well, one of them anyway). 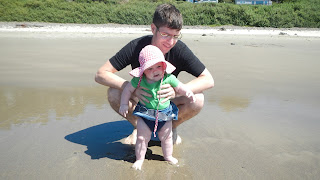 Things are finally coming into a bit of order.  She naps somewhat regularly -- though yesterday she decided to skip her evening nap, which was not as terrible as I thought it would be -- and I have a lot less anxiety about her eating and sleeping and just living in general these days, which is fantastic.  (I'm planning to devote some blog posts to those darker days, though, as I feel like not many people share those stories.  But that's for another time and another post.)  Now, though, I'm just focusing on digging out of my clutter, both physical and mental.

According to Gretchin Rubin, a great way to restore happiness is to declutter the physical space.  So I've begun to clean out my closets and drawers and storage and cupboards.  Another Gretchin-Rubinism is to do a little bit each day, rather than waiting for a huge chunk of time to tackle a big project.  And, I hate to say it (mostly because I am not a huge Gretchin Rubin fan), but taking a few moments each day to whittle away at a large task is really working for me so far.

Let me take a moment now and answer the question I know you're asking: Who the hell is Gretchin Rubin?  She is the privileged, Upper East Side author of The Happiness Project, a book I picked up at Powell's books on our way home from the Oregon Coast.  (I've linked Powell's books because it's my idea of heaven.  If you can click only one of the links in the previous sentence, click that one.  The Happiness Project is lame.  More on that in another post.)

Despite my annoyance with The Happiness Project, reading it has, as you can see, motivated me to de-clutter and reevaluate my own happiness.  As I mentioned above, I've been working on getting more organization in my physical life.  In addition, I've been looking at what in my life makes me happy and what makes me less-than-happy.

Figuring out which activities in life make me happy has been more similar to deciding whether to toss or keep that old Guns-and-Roses T-shirt than I thought it would.  Unconsciously, I think we all believe at some point or another that our clothes define who we are.  When we want to feel smart, we buy smart clothes.  When we want to feel cool, we buy cool clothes.  But, eventually, we realize that no matter what the shell, we're still just ourselves underneath.  Similarly, people say we are what we do.  Or that actions define a person.  To some extent, I still hold this to be true, but I also see that sometimes we pick certain activities just like we pick clothing.  In the same way I might see a girl looking free and awesome and happy in a neon pink mini-dress and then go buy the same dress for myself only to find it constricting and uncomfortable, I could also see someone having a blast...windsurfing, for example, and convince myself that windsurfing is for me, when it clearly isn't.

I realized I could decide which activities in my life to keep or toss based on which I liked best and used most often.  Lately, in addition to feeling buried under a bunch of outfits I never wear, I've also been feeling pressured to "do all my hobbies!"  Now that Ebba is here, I probably say "I don't have enough time for anything anymore!" about 20 times a week.  But part of the problem with that is that I have activities on my 'want to do' list that I don't even want to do!  This might sound stupidly simple, but it was a revelation to me.  I blame Facebook in part for this issue ("Oh look, so'n'so has taken up spear-fishing!  We've got to try that!"), but I think I had the problem way before Facebook.  It's so easy to see someone else enjoying themselves and think, "hey, that could be me."  I guess that's what the whole ad industry discovered ages ago.  I'm a little slower on the uptake. :)

Some activities I was convinced I wanted to try (or keep doing or do more regularly) include backpacking around the world, taking up lap-swimming, sailing, going on a cruise, owning a house, gardening, baking, scrapbooking, and sewing.  Don't get me wrong, I wouldn't refuse most of these things if given the chance.  For example, I do love sailing (when I don't have to do the work! :) ). But I was honestly feeling pressure to incorporate most of these things more into my life.  Every time I thought about my awesome sewing machine sitting in our storage locker I felt sad.  I felt overwhelmed with regret for not having lived out of a backpack for a whole year when I had the chance (ie: pre-Ebba).  I feel bad that I don't bake breakfast muffins or dessert cookies or home-made bread at least once a week.

Why was I clinging to these "should-do" activities?  I don't know -- maybe they were like that lacy top I bought one year when I thought I should wear more Parisian chic; I wanted to change Me.  I had a fantastic visit from a very old friend a few weeks back.  She's a sort of free, bohemian hippie type who goes where her dreams take her and the universe always appears to have a path for her at just the right time.  (She also has a composting toilet.  Rad.)  Sometimes I'm envious of her.  However, over a fantastic dinner and a few beers (at Six Acres, one of my favourite restaurants) it came out that she was sometimes envious of people like me, all settled-down and kidded-up.  And we realized, seemingly simultaneously, that "we can't do everything."  She loved her life and I loved mine, but that didn't stop us from looking at the other and wondering, "what if?"  What if that were me?  What if I were the free, bohemian spirit?  Or what if I were that woman in the souped up BMW that drove by?  Or what if I were that artist on the street?  What if I were that shop owner?  What if I were that movie-star?  What if I lived there?  What if I did that?

It's impossible (and probably unhealthy) to not ask myself these questions sometimes.  But to add things to my to-do list just because I felt I had to try and be all the "Me's" I could imagine was just not serving me.  The days are short with a baby!

I went through this same kind of existentialist dilemma over a decade ago in high school, or maybe it was even middle school (okay, almost TWO decades ago.  Sheesh!).  I was frequently feeling paralyzed by decision making (you know, the paralyzing grade-school decisions of where to sit at lunch and which boy to dance with at the school dance...), when I finally told myself that every time I made a decision, there was another Me out there somewhere in a parallel universe who decided the opposite.  So, I should never regret deciding what I did because I was always somewhere out there doing the other thing as well.  The best of both worlds.

Now, to go do what this Amanda likes to do: eat Peanut butter toast and do some writing!
Posted by Amanda C. at 10:27 AM